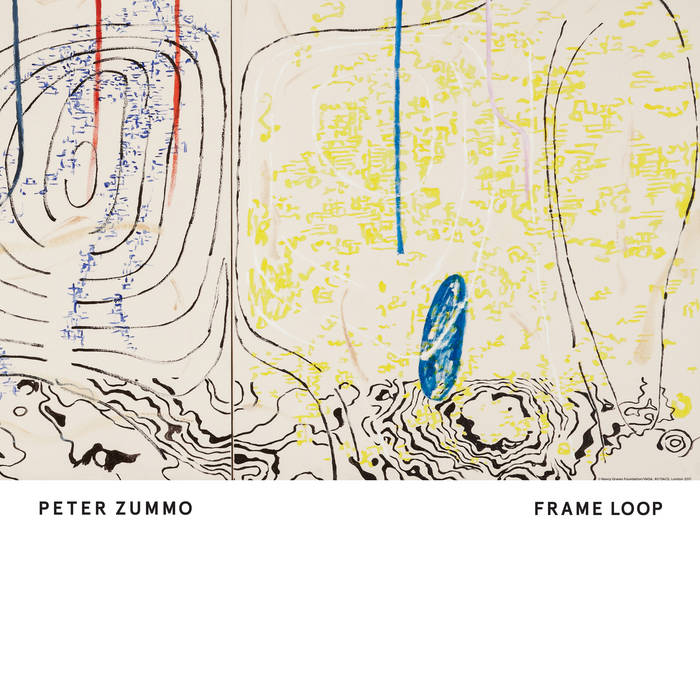 A few years ago​,​ ​American composer and trombonist ​PETER ZUMMO discovered a ​1984 ​recording ​of unreleased material from his ​Six Songs​ suite in his archive. Six Songs was the basis for LATERAL PASS​ (Foom 2014), his award winning score for modern-dance choreographer Trisha Brown’s work of the same name. Material taken from Six Songs can also be heard on ​his seminal ZUMMO WITH AN X (Loris Bend, 1985/Optimo 2012).

The work is now being released as a new LP, FRAME LOOP. Recorded live and ​in single takes, it features​ a stellar line-up of longtime ZUMMO collaborators:​ ARTHUR RUSSELL on amplified cello, BILL RUYLE on marimba, ​and ​MUSTAFA AHMED on congas. ZUMMO ​plays trombone and euphonium.

​ZUMMO describes ​the recording as ‘a​n ​exercise in spontaneous arrangement’. ​He ​mainly ​​hews close to the ​score, ​while from time to time introducing canonic lines ​and variations.
ARTHUR RUSSELL, using his signature amplified cello sound, alternates between ​solos and rhythm playing​. BILL RUYLE ​vamps on the notation, while MUSTAFA AHMED’s improvised percussi​on​ ​drives the forward momentum.​ Sometimes the music takes its time ​traversing a sonic landscape; at other points, it ​jumps from one section to another​​. Players'​ decisions ​push and pull the downbeat​; rounds ​emerge, then disappear​.

PITCHFORK have previously called ​ZUMMO's trombone work “peerless” ​and have described ​his music​ as​ “the sound of sublimity…that sends shivers down the nervous system​.” ​In​ an interview with THE QUIETUS, OPTIMO’s JD TWITCH characterised ZUMMO's ​playing as “sheer bliss.” ​
In addition to performing his own compositions and leading his own ensembles, ZUMMO has worked with myriad bands, orchestras, composers and musicians. His celebrated trombone style​ ​​is recognized as one of the most beloved features of ARTHUR RUSSELL​'​s sound​, for whom he played and collaborated with in the recording studio. ​Among many others are PETER GORDON and his LOVE OF LIFE ORCHESTRA​, drummer-producer TOM SKINNER (Hello Skinny), ​cellist-composer/producer OLIVER COATES, the LOUNGE LIZARDS,​​ including the recording of TEO MACERO’s Fusion, which ​also featured the London Philharmonic Orchestra​, and the Downtown Ensemble​. He lives ​in New York City.

Benji B talks about his new compilation ‘Deviation Classics’